International Development Secretary Penny Mordaunt spoke to the aid sector at their annual gathering in London on 26 February. This is a transcript of her speech: 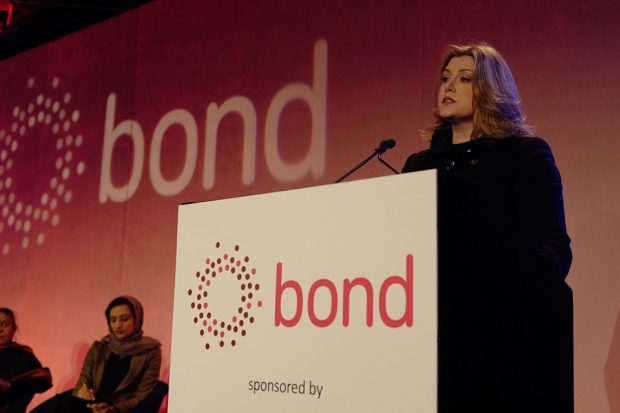 We’ve just 12 years left to fulfil our promise to the world’s poorest, and the commitment so central to the Global Goals – to Leave No One Behind.

We set ourselves the task that by 2030 every child will have the chance of a decent education, but we are 85 years adrift on current projections – not set to achieve that until 2115.

That is better though than our current assessment on when we will end malnutrition – we are looking at least a century before delivering that.

And we’ll be well into two centuries hence before we do make extreme poverty history.

You know that on current trajectories, achieving the Global Goals – which we talk about and show our commitment to in the pin badges we wear – is simply out of reach.

We’ve known for some time we are failing.

The facts speak for themselves – and the many we are letting down.

To deliver on the promises we’ve made to the world’s poorest, business as usual isn’t going to cut it.

Let us reflect for a moment on the issue currently dominating the headlines: sexual exploitation of the vulnerable, known by some, ignored by others.

How did we get to this?

How did those, there to protect, support and serve the most vulnerable people on earth, become complicit in their exploitation – by protecting the perpetrators, by failing to grip the problem or turning a blind eye?

Because we failed to put the beneficiaries of aid first.

How did we lose sight of that fundamental duty, for all the good people, many in this room today, and all the good works done? For be in no doubt that is what has happened.

It may have started with an attitude born of fundraising pressures, fierce competition for bids or work, guarding an organisation’s reputation to maximise its reach and offer.

That attitude found a justification, via the chaotic and complex situations we operate in, the belief that reporting wrongdoing would do more harm than good, that we’ve so many other things to worry about, or that peacekeeping troops are doing far worse.

And then any nagging doubts that lingered, as predatory individuals moved to another organisation’s payroll, were banished, in order to avoid any criticism of the sector.

Maybe that’s how it happened. Maybe.

However it did, the result was the grotesque fact of aid workers sexually exploiting the most vulnerable people, and threatening whistle-blowers if they protested.

In our respective walks of life – in aid and in politics – we have difficult choices to make, some of life and death: Who to help. Who to save. Who to rescue. How to do the most good. How to do the least harm.

But on some issues there is no choice.

You cannot help and support people, you cannot give them hope and a chance, you cannot promote human rights or the dignity of every human being – whilst paying them for sex, and whilst funding an industry that exploits them.

So why do we find ourselves here?

Because we’ve forgotten three things: The needs of those we are here to serve. The expectations of those who enable us to – the British people. And the values that make us who we are.

To recover we must put the beneficiaries of aid first.

We must live up to the values of our nation.

We cannot separate the aid this nation gives from the values this nation has. So, how will those principles and values help us deliver the goals?

First, they will improve our performance.

In Somalia, by putting beneficiaries first, sharing data and working together, aid organisations have staved off famine.

And I’ve seen so many nations, frustrated at a humanitarian system which if it worked better would give us a billion more to spend on helping people, start to come together to speed up the pace of reform.

Second, it will enable others to help.

I’ve seen entrepreneurs forfeiting profit and their own security to bring water, healthcare and childcare to their workforce.

Major companies wanting to make this their mission.

Small community organisations and businesses connecting with and supporting those in the developing world.

And I’ve seen the courage and commitment of our armed forces opening up the space for us to operate in.

We need the humility to recognise what others can bring will multiply our efforts. And we need to let many others help.

I’ve seen the poorest in our own nation giving generously to others less fortunate than themselves, time after time – whether it’s in DEC appeals, or in Oxfam’s shops.

They’ve seen Ebola defeated, girls educated, hurricane victims rescued, polio near eradicated, and hope and help brought to Syria’s hell on earth, by individuals risking everything, everything, for the love of humanity.

They continue to give, but I can tell you on many fronts they want us to raise our game: on what you do, on what I fund, and what together we can achieve.

And finally, we must live our values because what you do, what Britain’s aid sector does, is more than satisfy the practical needs of life.

In addition to food, water and shelter we bring the rule of law, security, justice.

We bring protection for refugees and human rights.

We bring freedom – of thought, of religion, of scrutiny, of the press.

We bring empowerment – of women, of people with disabilities, of children.

Without us bringing our values to work, we will fail in that work.

So, let this moment not just be a wake-up call to improve safeguarding.

Let it also be a wake-up call to all that we must be, if we are to deliver on our promise to the world’s poor.

I will shortly bring forward a new development offer focussed on delivering the Global Goals.

It will require others to help.

It will require us to change where we work and who we work with, and greater cooperation between DFID and our armed forces.

It will depend on the private sector.

It will require more sharing of data and working together.

It will compel us to leave no one behind.

It will make UK aid work harder – delivering for the world’s poor, but also for the UK’s security and prosperity, upon which UK aid depends.

It will require me to stop funding organisation that do not deliver our objectives, contribute to the Goals, or live up to our standards.

It will have our national values and freedom at its heart.

It will require leadership and courage to deliver.

And it will put our beneficiaries first.

They are the 10 million more children who will see their 5th birthday. The 81 million who will have enough food to develop normally. And the 400 million more able to read and write. If we do deliver the Global Goals by 2030.

In my first week in this job I told you that I believe in aid.

And I’ve not changed my mind.

The organisations in this room do great work. I know that. I’ve seen it with my own eyes.

All the vital work that Bond members, organisations of all sizes, from small to large, do each and every day. Passionate, committed, tireless individuals doing amazing work, in some of the most difficult circumstances imaginable.

I believe in British compassion and charity. From the Magna Carta to universal suffrage, from William Wilberforce to Peter Benenson to Leonard Cheshire – as a nation we can and we have made the world a better place.

Since the Oxfam scandal broke, you and UK aid have helped vaccinate around 1.5 million children from polio.

But if we have the courage and the will to change we can do more.

We know what to do.

We know what to be.