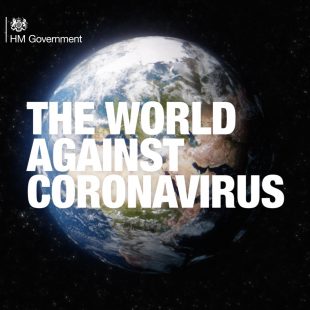 The Prime Minister’s call for global cooperation and investment to find a coronavirus vaccine has received widespread positive coverage in newspapers, online news and broadcast outlets.

Boris Johnson said ahead of a pledging event on Monday (4 May) that “the race to discover the vaccine to defeat this virus is not a competition between countries but the most urgent shared endeavour of our lifetimes. It’s humanity against the virus.”

The story ran on the front pages of The Daily Express, The Daily Telegraph, The Times, The Guardian and Metro, all welcoming UK aid’s support for research to develop vaccines, treatments and tests.

It is only by working together that we will prevent future waves of infection and end this pandemic as quickly as possible.

By strengthening developing countries’ health systems and working to find a vaccine, the UK is playing its part in stopping the global spread of coronavirus to save lives everywhere and protect our NHS.

Many of the media reported how Britain is already leading the global fight against coronavirus, by donating the most by a single country to the global CEPI (Coalition for Epidemic Preparedness Innovations) fund to develop a vaccine.

Other media focussed on the PM’s comments urging countries to see vaccine research as a “shared endeavour” not a competition.

The International Development Secretary was also quoted by regional newspapers the Shropshire Star, the Aberdeen Evening Express, the West Midlands’ Express and Star, Somerset’s the Chard and Ilminster News and the East London and West Sussex Guardian.

The story was also covered on the news bulletins of ITV News, BBC News, BBC Radio 4’s World at One and Radio 4’s Today Programme as well in a special interview of Sir Jeremy Farrer, director of the Wellcome Trust, who highlighted the UK’s critical role in co-hosting Monday’s pledging conference.

Separately, the vice-president of the European Commission, Margaritas Schinas, discussed the event on the BBC’s Victoria Derbyshire show, where she highlighted how co-hosts, including the UK, “will ensure fairness, in terms of access, is in place when there is a vaccine”.

The story had also been picked up extensively in Nigerian outlets, including The Nation Online, Vanguard, News Agency of Nigeria, Nigeria News Direct, Real News Magazine and News Verge, which include a full quote from the International Development Secretary, who called for countries to work together to prevent “future waves of infection and end this pandemic as quickly as possible”.

Similarly in Mozambique, Club Of Mozambique carried the story, saying the conference was hosted on Monday to raise funds for research into coronavirus vaccines and treatments at which celebrities, world leaders and philanthropists pledged €7.4bn.

An op-ed by the International Development Secretary to mark the pledging conference has run in papers in 10 different countries across Africa, Asia and Europe, including on Rwandan news website RNA News, in Nigeria's Premium Times and in The Daily Maverick in South Africa. It also ran in The Jakarta Post, on Al Arabiya's English language website, read throughout the Middle East, in Portugal's top national daily Diário de Notícias, in La Croix in France, in El Mundo, Spain’s second most popular paper with 20 million unique monthly visitors to its website, and in Finland's Turun Sanomat.

It has also appeared in a shorter, translated form in multiple Italian media including Ansa, which in March this year had 14 million unique visitors.

The piece in its original English says that the “more countries, businesses and global organisations pull together to pool their expertise, the faster our scientists will succeed in finding a vaccine, accessible and affordable for all”.

In her words, the International Development Secretary also explains that on June 4 the UK will host the Global Vaccine Summit to help raise funds for Gavi, the Vaccine Alliance.

The opinion piece is expected to feature in other media in the coming days, including across the Middle East.

Dr Tedros Adhanom Ghebreyesus, Director-General of the World Health Organization, has tweeted thanking the UK for its pledge at Monday’s conference, as has the Foundation for Innovative Diagnositics (FIND).

Many thanks @BorisJohnson, ?? Prime Minister, for your pledge of €441M+ to the global #COVID19 response. The #UnitedKingdom is a key partner to @WHO in our efforts to keep the world safe. #UnitedAgainstCoronavirus

The PM’s message delivered at the event has also been viewed on Twitter over a million times and retweeted nearly 1,000 times.

"The race to find a vaccine is not a competition between countries, but the most urgent shared endeavour of our lifetimes. We're in this together, and together we will prevail."

– PM @BorisJohnson calls on countries to come together to defeat coronavirus. pic.twitter.com/vNJ0ctyRpz